To say that the Nickel market has been in a state of disarray in March would be a gross understatement. Historic, unprecedented, ridiculous, frustrating, and embarrassing are many of the adjectives muttered in the past three weeks to describe the plight of the key alloying element. So, what happened and what does it all mean? Let’s try to make sense of it here.

Nickel opened March with a closing price of $11.39/lb. on the 1st. The average price of the commodity was $10.97/lb. in February, so this was a notable increase. Much of the late February and early March upward movement of Nickel was (rightfully) attributed to the situation with Russia invading Ukraine. Since Russia is a key player in the Nickel supply chain, it was logical that commodity traders would price this disruption into the value of it on the London Metal Exchange (LME). As the first week of March progressed, each new day brought a higher closing price of Nickel – reaching levels last seen in 2011.

What happened next was nothing short of astonishing. Nickel opened trading on March 7th at the 13.21/lb. price level. During that trading session, the commodity meteorically shot up to $23.10/lb. The following day proved even wilder, with Nickel registering $46.00/lb. before the LME suspended trading. If you’ve been keeping score, that run went from $13.21/lb. to $46.00/lb. in less than two days.

A Chinese tycoon (Xiang Guangda) with the moniker “Big Shot” single-handedly fueled Nickel’s sudden 250% increase. Xiang built a massive short position in nickel futures – betting that the price would fall. When the price increased, he had to cover his losses by buying back shares of Nickel, further escalating the price of the commodity into the stratosphere. The company he runs, Tsingshan, is slated to bring hundreds of thousands of additional nickel tons to the market in late 2022, hence his hedge that prices will eventually soften.

As a result of all of this, the LME suspended trading of Nickel from March 9th through March 15th. The pause in trading was an effort by the LME to calm the market and to allow time for Xiang to work with his lenders and the LME to cover his short position. While trading of Nickel was shut down, the LME cancelled the transactions that took place on March 8th and reset the price to the closing value from March 7th – which was $23.10/lb.

After the events of March 7th and 8th, the stainless steel and nickel alloy supply chain was thrown into a state of confusion and uncertainty. Producing mills either declined to quote or offered a limited price in effect at time of shipment offer. Distributors based quotes off of the new, decidedly higher value of Nickel – yet kept validity to 24 hours or less.

So where are we now? In the 4th week of March, we are starting to see the market slowly correct itself. The LME began trading of Nickel on the 16th. Each day it has traded since then has seen the commodity fall in price by the largest allowable percentage (5% on the 16th, 8% on the 17th, 12% on the 18th, 15% on the 21st). Popular sentiment points to Nickel settling somewhere in the $11 to $13 per pound range after this is all over.

That leaves us with a challenging April, at a minimum. Stainless surcharges have been confirmed for material deliveries next month, with the 304/304L surcharge increasing $0.24/lb. and the 316/316L surcharge increasing $0.29/lb. Prices will remain elevated for several weeks, but the May and beyond outlook is less certain. If Nickel ends up settling in the $11 to $13 per pound price band, we’ll see May pricing much closer to March levels than what April will yield.

Please reach out and engage your counterpart at Ward if you have further questions.

Below is a chart from the London Metal Exchange (LME) showing the pricing levels pre and post the suspended trading of Nickel on 3/8/22. 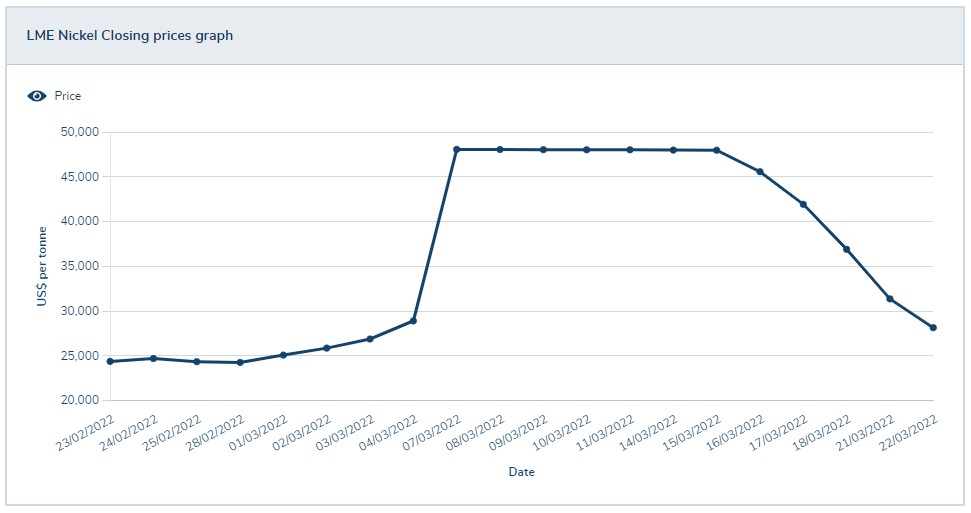 Nickel reached values not seen in a decade in February, methodically moving from $10.33/lb. at the start of the month to close at $10.99/lb. Multiple factors helped to propel the commodity, from low inventories in warehouses, to healthy EV market demand, and lastly, the developments with Russia invading Ukraine. For context, Russia accounted for roughly 5% of global nickel output in 2021. Please refer to above section entitled “Emergency Update on Nickel Pricing” for latest news.

Below is the 90 day Nickel Price Trend (US$ per tonne). 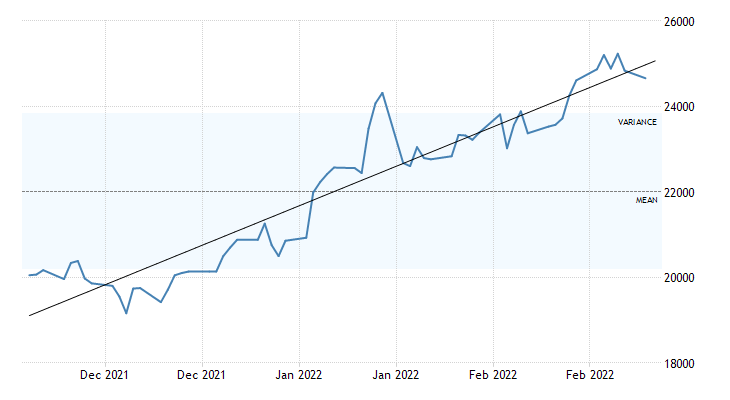 The chart below illustrates Nickel price by way of U.S. Dollar per Metric ton.

Domestic steel mills continued to hold steady in February, maintaining plate prices at their December level. Indications continue to point to carbon steel prices being under downward pressure as 2022 progresses.

Commodity stainless and Duplex plate deliveries remain in the 7 to 11 week range, while Nickel alloy plates are out to the 20 to 26 week range. The nickel alloy plate delivery schedules continue to be impacted by the ongoing labor strike at Special Metals in Huntington, WV in addition to increased demand. Carbon Steel plate mill deliveries continue to remain in the 8 to 12 week delivery range.

Welded tubing – Stainless strip supply has somewhat plateaued, allowing for some deliveries in the 10 to 16 week range, although larger quantity orders are in the window of 18 to 26 weeks. Carbon steel tubing deliveries have lead times ranging anywhere from 8 to 12 to 20 weeks when strip is available. Welded nickel alloy tubing ranges from 16 to 26 weeks, with some cases of 30 week deliveries.

Seamless tubing – Current schedules reflect 8 to 22 weeks or more for carbon steel (26 to 30 weeks for Western European carbon seamless) and 8 to 30 weeks for stainless. Seamless nickel tubing is being offered at the 10 to 12 week delivery window so long as hollows are in stock. If hollows are not readily available, anticipate deliveries of seamless nickel tubing in the 20 to 32 week timeframe.

The metal market is still in a tremendous state of uncertainty and price volatility, so please don’t hesitate to reach out if you have any questions. 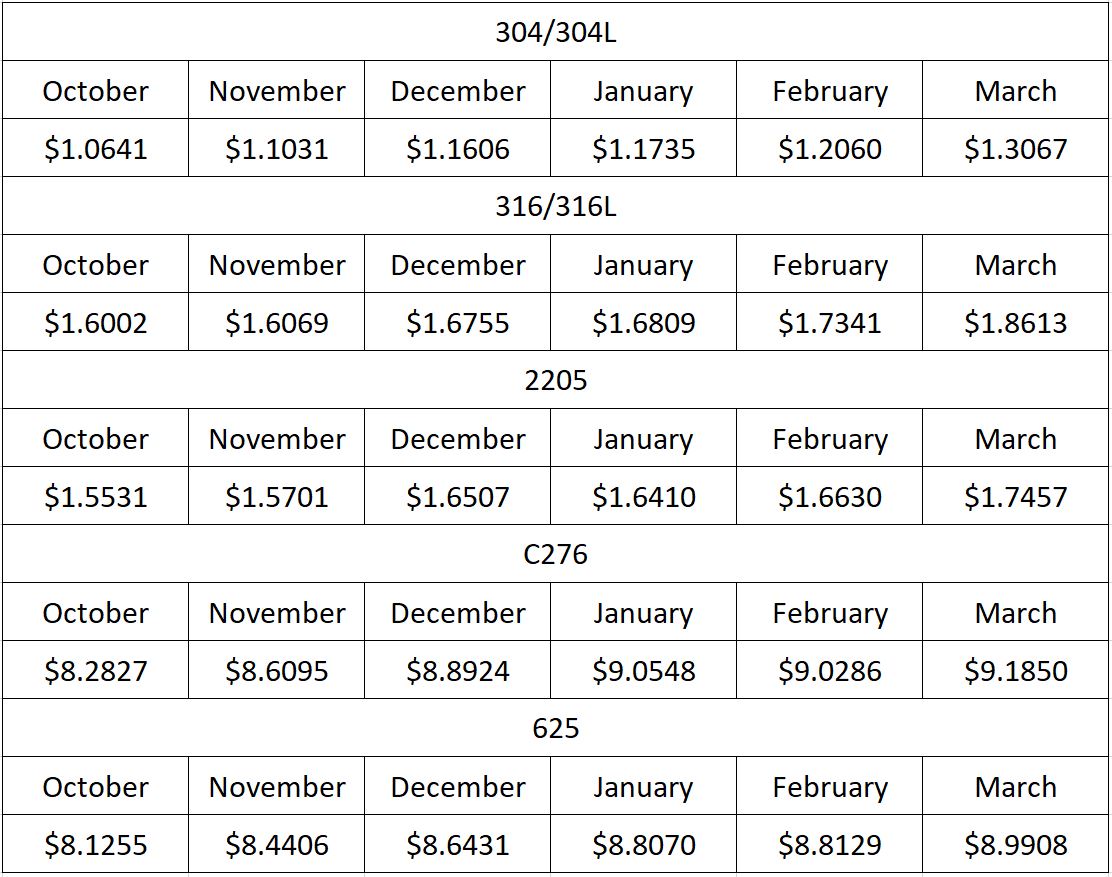 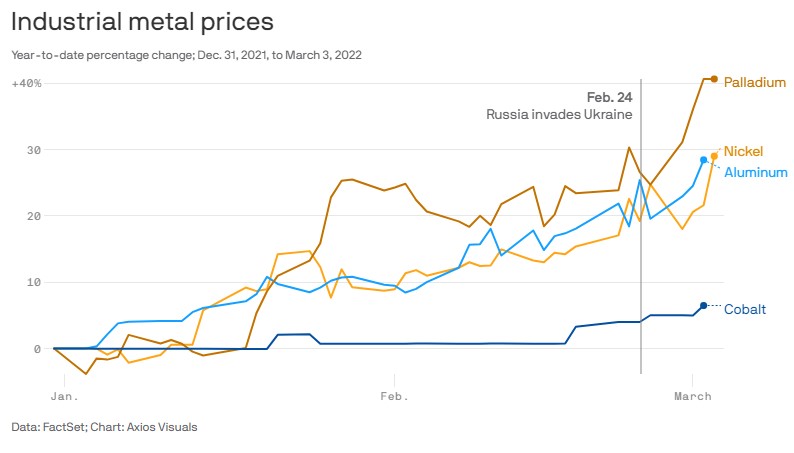